Directors on the Light House board share a passion for sustainability and help us achieve our mission by providing strategic direction and oversight. The current Light House Board of Directors comprises dynamic individuals with experience in the fields of environmental management, construction and engineering, and communications and outreach.

John Holland joined the Light House board in 2008, bringing decades of environmental consulting experience to the boardroom table.

John got to know the Light House team well through his work at Pinchin West, having used Light House’s services on a number of occasions: to develop a model for green leases (which promote shared tenant/landlord responsibility for reducing energy consumption), to study the financial impacts of the BOMA Go Green program, and to create a green building toolkit for the RCMP. John sees Light House as a “coherent, ethical, and respected advocate for sustainability” and works hard to guide it toward success.

John also serves on the UBC Faculty of Applied Science Technical Advisory Committee, and is a Fellow of Engineers Canada. He is the former Chair of the Association of Professional Engineers and Geoscientists of BC (APEGBC) Environment Committee and has served on the Sustainability Committee.

Bryn was instrumental in building Vancouver’s first laneway house in 2010, and the first net-zero solar powered laneway house in 2012; Lanefab’s designs are now incorporating purple pipe (greywater) systems and designing to Passivhaus standard. Lanefab Passivhaus projects are located in North Vancouver, Tsawassen and San Francisco. Since 2009, Bryn has completed over 50 energy efficient, small infill homes, and is recognized as a tiny house movement advocate; the Rao/D Pod, a 360 sf condo he and his wife designed and lived in for three years, is featured on Inhabitat.

James Boothroyd now wears two hats, as Senior Policy Advisor for Metro Vancouver’s ground-breaking National Zero Waste Council, and as a consultant for, among others, the directors of a coalition of 14 major national environmental groups, including WWF, Greenpeace and Pembina.

James is the author of Project Green Bloc, a three-year project designed by Riley Park, Vancouver residents, which tests research and activities which address hyper-consumption and climate change. Project Green Bloc is funded by the Vancouver Foundation, sponsored by Evergreen, and supported by the David Suzuki Foundation.

Freda Pagani is an icon in sustainability – she was a founding director of Cascadia Green Building Council, is a Cascadia Fellow and was given the Lifetime Achievement Award for her work in sustainability from the CaGBC.  She started the UBC Office of Sustainability, which was the first campus sustainability office in the country, by offering it as a zero-cost proposition to administration and funding it with the energy and water saving measures she implemented at UBC.  Freda is a retired architect and teacher and an active multi-media artist. 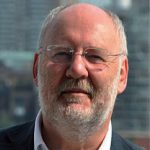 Dr Raymond Cole is an Emeritus Professor and past-Director of the UBC School of Architecture and Landscape Architecture, where he taught building-related environmental issues for 40 years. Although his education is in engineering and science, Dr Cole has spent the majority of his career in the field of architectural research and education, and is an Honorary Member of the Architectural Institute of BC and a Fellow of the Royal Architectural Institute of Canada. He is a past-Director member of the Canadian Green Building Council and past-Academic Director of UBC’s Centre for Interactive Research on Sustainability (CIRS).

Dr Cole has received numerous academic and professional awards and distinctions for his research, teaching and leadership activities in the field of green building design and performance assessment. He holds the designation of North American Association of Collegiate Schools of Architecture Distinguished Professor and UBC Distinguished University Scholar. Dr Cole is a Cascadia Fellow; a recipient of the US Green Building Council’s Green Public Service Leadership Award, the AIBC’s Barbara Darymple Memorial Award for Community Service, the Sustainable Buildings Canada’s Life-time Achievement Award and the Canada Green Building Council’s Lifetime Leadership Award. Dr Cole was a recipient of the 2013 World Green Building Council Chairman’s Award and, in 2019, invested into the Order of Canada.